The middle east is a part of the world where resources, tradition and fantasy stories are not in shortage. And with the release of Arabian Nights video slot, NetEnt has perfectly demonstrated just how vibrant this part of the world really is.

In fact, Arabian Nights video slot is a Network progressive jackpot game. It’s one of the earliest progressive titles released by the award-winning provider. And admittedly, since the graphics signature isn’t as advance as Divine Fortune or Mega Fortune video slot per example. It’s often a game that people forget to try. Well, that’s until the jackpot reaches Millions of rupees. Then everyone tries their luck at winning it.

But actually, they’re other reasons why this game is a must-play, even if the jackpot isn’t very high. And below you’ll discover why Arabian Nights video slot, should make it onto your list of games to play at any time.

What’s so special about this video slot: Arabian Nights video slot unlike other progressive titles in NetEnt’s collection only has 1 jackpot. And the way players can win it is utterly unique since they’re no special bonus game to trigger or a bonus wheel to spin. In fact, to pocket a life-altering win on this game, players only need to get 5 wilds symbols on the reels simultaneously. 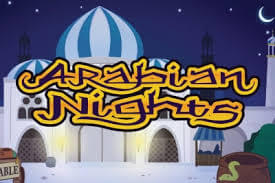 Now the 5 wild symbols can appear in both the main game and in the free spins feature. So remember to pay special attention to the reels’ action at all time. And even more so if a little popup shows up on your screen as it is the notification that the jackpot is yours.

Players who are looking for exceptionally rewarding gameplay and yet a straightforward one should definitely give Arabian Nights video slot a try. Indeed, in this game, there’s only 1 bonus, besides the jackpot, and it’s the free spins.

The free spins feature is triggerable with the help of 3+ Genie lamp symbols. The bonus game always awards 15 free rounds. And during the feature, all wins are 3x, excluding the jackpot naturally. Another thing that’s worth knowing is that the scatter pays in this slot.

And getting 5 lamps on the reels at once will award 500 coins instantly. So as you can see, the paytable of this game is on the higher end of the scale. And that’s quite rare for a slot that sits so low on the volatility index.

All and all, this slot is a game that often makes the headlines because every few months are so, a lucky player changes its life with a spin. Now NetEnt has not released an official count on the total payout as of today. But we know it’s in the Billions of rupees.

The largest amount won on this game is worth just over ₹387 Million at today’s conversion rate. And a lucky player set that record in 2010. Think you have what it takes to set a new all-time high win on this slot. Well have a look at the jackpot and who knows, maybe you could be the one. If not, you’ll have a blast playing this slot it’s a fun bet for those who enjoy straightforward gameplay.