With the release of Arcane reel chaos, NetEnt is bringing to life a futuristic battle between good and evil. In fact, the villain, sir Deep Pockets, is creating commotion in town. So much so that the city’s church collapsed as you’ll see in the game’s background.

Apparently, the city’s last hopes are the 4 heroes’. So, as the night sets on the reels, the devilish Sir Deep Pockets gears up to create yet another storm. And the heroes are also preparing to destroy him as well. At least that’s what the storyline wants us to believe.

In essence, if you decide to take Arcane reel chaos for a spin. You’ll quickly realise that each hero has its unique power that he’ ll/she’ll display on the reels. Naturally, as for all adventure game, the skills the heroes hold could make you win big. So, shall we see what the future holds? 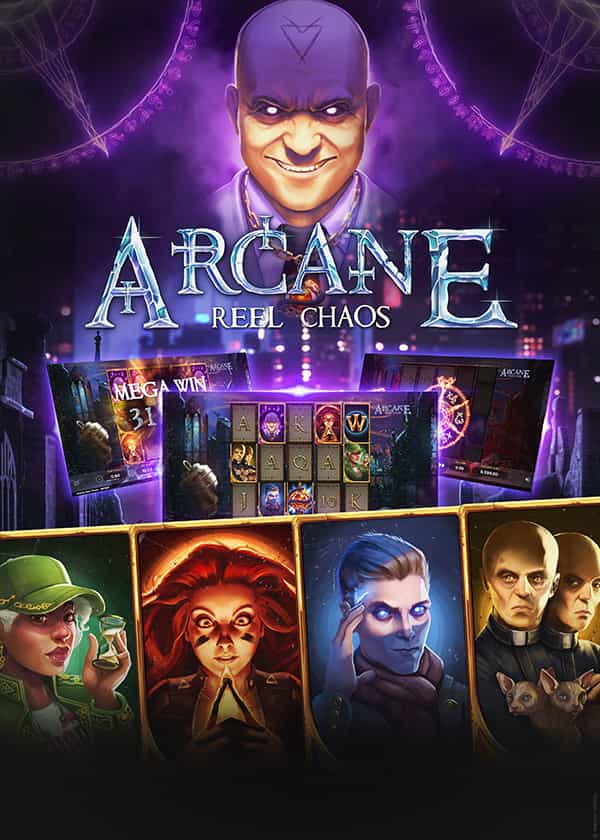 To sum up the gameplay of Arcane reel chaos video slot boast with random features. In fact, from time to time, the heroes will unleash reel modifiers or add-ons that will make you win big. Or give you a second chance at winning again if the feature is triggered after a non-winning spin. You’ll know that a random feature is active when a card appears on the left-hand side of the reels.

Now during the base game, the fight between good and evil won’t be that obvious. Well, at least not as evident as in the free spins feature where one hero (selected at random) will go head to head in a battle with Sir Deep Pockets. And if the hero wins the battle, you could be on the verge of an epic win since multipliers are in play during the feature.

Arcane reel chaos video slot is a game that is fully optimised for mobile casinos. In fact, it’s playable in both landscape and portrait mode. But it’s worth knowing that the battle feature is a lot more fun on mobile devices if you play it on portrait mode because you’ll see the remaining health points a lot clearer. And consequently, this will contribute towards delivering good adrenaline rushes.

Arcane reel chaos video slot is suitable for all levels of player since it’s a low to medium variance game. Plus, it’s accessible with no downloads. So you can join the battle from any browser if you’d like. And generally speaking, most casino operators will allow you to wager bonus funds on this game too. So why not claiming one of the offers available on indiancasinos.org to keep the fun lasting on this game.