When NetEnt created Asgardian Stone, the Swedish provider took its inspiration from its roots. Indeed, as you probably know, Asgardian is the name of the city where Viking gods live. And so this slot transport players in a mythical world where the mighty Odin rules the reels.

So, it’s no surprise that Odin, the god of all gods is a huge symbol that will crush runes of lesser value as you set the reels in motion and symbols tumbles.
Look wise, Asgardian Stone is once again a fine example of the talents NetEnt employs.

Even if the game interface is dark, the carved ruins symbols stand out on the game’s background. Plus, the multiplier index is also easy to spot as it lights up with consecutive wins to increase the payout value. And so in a beautiful way, the game entertains and pays tribute to NetEnt’s Norse heritage. 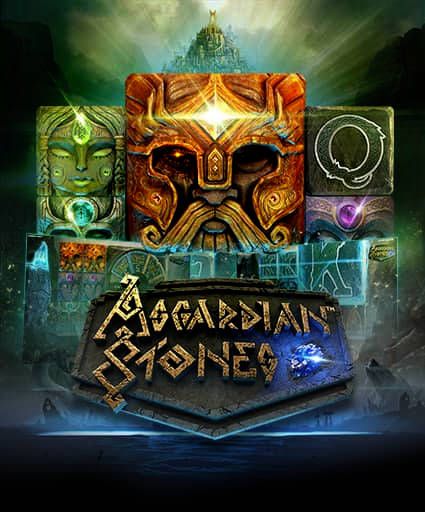 Asgardian Stone the gameplay and core mechanics into more details

Both the base game and the free spins feature offer excellent winning opportunities in Asgardian Stone video slot. And this is mostly because of the avalanche feature with increasing multipliers which could quadruple the value of a winning combo.

It’s worth knowing that the main game and the bonus spins offer the same multipliers (2x, 3x 4x). And so when you couple that with the well-balanced paytable and the good hit frequency, it’s hard to ignore the payout possibilities. And let’s not forget to mention that the free spins feature is re-triggerable endlessly too.

So if you’re lucky, the bonus wheel could award you 5 free rounds multiple times when spinning for free. And if you’re luckier, the colossal Odin symbols will frequently crush symbols at random when it shows up on the grid as well.

As you can see, in Asgardian Stone video slot chance plays an important role in the payouts you’ll collect. Well, naturally we could say the same thing about all game of chances. But it seems that in this game it’s more evident than in others.

Indeed, remember that to spin for free, you’ll first need the bonus wheel to appear on the game interface. Then you’ll need it to land on 5 free spins to play the feature. If you miss the free spins space on the wheel, you’ll collect between 40 coins and up to 400 coins instantly. Plus, you’ll have to play some more to get another chance at possibly triggering the bonus feature where players generally speaking wins the most.

So, if you feel lucky today why not giving Asgardian Stone video slot a spin and see if the mighty Norse gods will reward you.