Betsoft sure knows how to capitalize on a hit. But more importantly, they understand what it takes to make a great sequel. And with the release of Back to Venus in April 2020, the game provider is, once again, showing off its talents.

Indeed, Back to Venus takes the gameplay of the 2014 release, It Came from Venus to the next level. In fact, not only did the slot get a complete technological revamp since it no longer uses Flash, but HTML5. But Back to Venus is also more volatile and offers a better base game max win worth up to 4,338x stake.

When it comes to the features, Betsoft has put a lot of attention in the game development to ensure players would have the best possible gambling experience. So, let’s take a look at the slot’s mechanic and give you more information on how to trigger the bonuses.

Frequently asked questions about Back to Venus video slot

What’s so special about this video slot: as seen above, this slot has an incredibly high RTP. In fact, it’s 0.57% above average. Plus, it’s also significantly higher than the original game in Betsoft’s Venus range. Certainly, the increased RTP has a lot to do with the fact that the sequel no longer offers a progressive jackpot, as its predecessor did. But what’s really special about this game is the intricate math model it boasts. This means that this slot is more volatile, has fewer paylines, and yet offers better winning odds to players. So, it goes to show that Betsoft not only put a lot of effort into enhancing the look of the game. But the overall gameplay too. 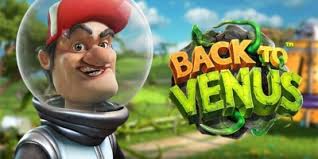 Savvy and novice players should find the gameplay of this slot thrilling. The main reason for that is the second chance re-spins with sticky wilds.

Indeed, in the base game and after a spin award no payouts wild asteroids can crash onto the grid. And they’ll remain there for 2 free re-spins. As the re-spins play out, more asteroid wild can appear on the second, third, fourth, or fifth reels. This will drastically increase the player’s chances of collecting a win since there’s no limit to the number of asteroid wilds players can get.

It’s worth knowing that the sticky wild asteroids are also in play during the 10 free spins bonus. Plus, if you get 4 Scatters the Wild symbols can also multiply the value of a winning combo. So be on the lookout for 3+ bonus symbols as they could be your key to collect astronomical wins.

There’s certainly a lot to like about Back to Venus. And that’s even if the paytable isn’t the highest. For example, the best-paid symbol is the cosmonaut. And when 5 pepper the reels, players will collect 15x their stake. But, this is expected as the theoretical return to players is incredibly high. And naturally the stats above also take into account small wins not just big and epic ones.

With that said, this slot is still a great bet. And even more so for players who play with a casino bonus.

But keep in mind that not all operators will allow players to wager bonuses on this game. So, if you were thinking about playing this slot after claiming one of the offers advertised on indiancasinos.org, you’d be wise to speak to the customer care department. This way you’ll fully understand the contribution each spin will give you.