As a Scandinavian studio, Thunderkick certainly isn’t afraid to create slots inspired by different cultures, social phenomenon, and tales. Yet, with the release of Beat the Beast: Kraken’s Lair, the content creator opted to pay tribute to its Nordic roots. And they brought to life one of the most feared sea monsters in Norse mythology, the Kraken.

Now, most of us in India aren’t familiar with this mythological beast. But it’s worth knowing that according to legends, the giant octopus-like creature lurks the seas between Greenland and the Norwegian coast. While the beast is mostly part of Norse folk, some say that the tales of the creatures are so petrifying that they still terrorize fishermen today. So when knowing how legendary the monster is, it’s no surprise that Thunderkick decided to immortalize the animal as they set sail onto a new adventure in Beat the Beast: Kraken’s Lair video slot.

What’s so special about this video slot: with the release of Beat the Beast: Kraken’s Lair, Thunderkick has pioneered a new feature, expanding wins. In essence, the expanding wins allow players to create winning combos as it modifies the reels to add identical symbols.

The expanding wins are triggered able in both the main game and the free spins feature. And so as a golden Kraken emblem symbol completes a winning combo, matching symbols will expand to cover 3 rows to award bigger payouts. But remember, each Kraken symbol has its own individual win expansion attached to it. So in other words, if 2 are present on the reels, they’ll each substitute a series of symbols according to the paylines they land on.

Now besides the expanding wins that we briefly described above. It’s worth knowing that this game offers a generous free spins feature. To activate it players will need 3 golden Kraken emblem symbol to land on the reels at the same time. By default, players will play 10 free spins. But it’s possible to win more as the feature plays.

Another exciting thing about the free spins is that at the beginning of each game round, a golden Kraken emblem symbol will be placed onto the reels at random. And naturally, the added symbol drastically increases the players’ chances at landing a win. Just like in the base game. 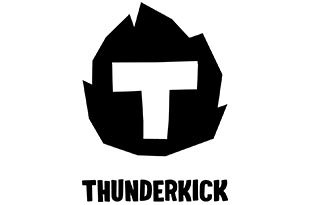 Beat the Beast: Kraken’s Lair video slot is a fantastic game that plunges players deep underwater and were treasures worth up to 7,777x a player’s stake are at hands reach. Most savvy casino players will agree with us that Beat the Beast: Kraken’s Lair video slot max win is significantly higher than other 9 win ways online slots. So, it’s no surprise that online casinos who love to make big winners, like the ones advertised on Indiancasinos.org offer it.

All and all, the gameplay of this slot is quite simple. But it’s expected since Thunderkick, generally speaking, create slots that are geared towards all levels of players. So, their games are straightforward and allow the players to claim a casino bonus to play them. But also focus on the reels’ action, as it should. Try it, you’ll see.