Mesmerising tales, folks, and legends are what describe Quickspin’s game library best for some Indian players. And they’d be right to say that. After all, the Swedish game provider brought to life so many iconic stories that it’s hard to miss. And yet with the release of Crystal Queen video slot, the content creator once again took inspiration from a fantasy novel and its Scandinavian roots to entertain.

In fact, Crystal Queen video slot is an exceptionally well conceptualise progressive grid slot that is mostly influenced by the Danish novelist Hans Christian Andersen. And so, in other words, this means that it’s a game where strong characters collide to create winning combinations. But it’s also a slot that’ll attract the romantic ones in search of a winter wonderland love story.

And potentially big wins too as this game of chances burst with exquisite and rewarding features as you’ll discover below.

What’s so special about this video slot: A great thing about Crystal Queen video slot is that it’s not just the gameplay that is diverse. But actually the betting range and the pay structure too. In fact, the base game pays from left to right as (most games do). 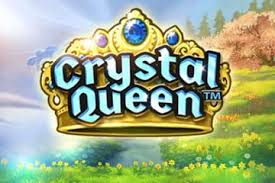 But it also offers a progressively unlockable game grid with increasing multipliers as you’ll find out a bit later in this review. The free spins feature, on the other hand, pays both ways. Evidently, this is what makes this game particularly unique. And, so sorted after by Indian players who are looking for a good value slot to capitalise on those small bets.

As a whimsical track accompanies each spin, players will certainly feel the heat increasing as each winning combo creates a reel tumble (re-spin) with increasing multipliers (up to 5x). But also as they have the chance to unveil a larger portion of the grid (in the base game) with every win.

As you can see, Crystal Queen mostly banks on consecutive wins to deliver massive payouts in the main play area. But it’s worth knowing that as the reel tumbles other features like spreading wilds can also influence the size of the payout players will collect at the end.
Naturally, the lucky ones will have the opportunity to collect the biggest payday during the free spins feature.

And this is because the reels aren’t covered. And also because players stand double the chances at collecting a win since the bonus uses a win both way pay structure as mentioned above.

It’s with no hesitation that we recommend Crystal Queen video slot to all players. Sure the overall concept and storyline are a bit far from our Indian heritage. Yet, it doesn’t mean the slot isn’t entertaining. It’s quite the opposite. And the best things are. You don’t even need to be familiar with the original tale to love this game.

What we especially enjoyed about this slot is the various betways and combination of mechanics that when time right can drastically multiply the fun and the payouts. Try it, you’ll see. And to maximise the enjoyment, consider claiming one of the many offers advertised on indiancasinos.org.