Divine Showdown Video Slot, as the name implies invites players to witness a clash between divinities. In fact, the action of this game appears to take place in an imaginary realm where tall cathedrals stand on either side of the reels. And the blue sky with swords leads us to believe that Athena, Thor, Wukong and Anubis are defending the majestic kingdom against each other. And this, of course, translates into epic battles on the reels as you’ll discover in the below game description.

Granted that some might say that Play’n Go missed a chance to localised this game for India by adding the Hindu god of war, Kartikeya. But all is not lost since Play’n Go often release sequels. Anyhow, for now, let’s focus on Divine Showdown Video Slot and tell you a little more about this game. 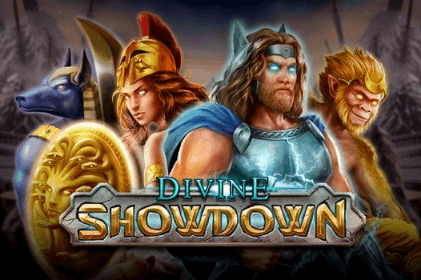 Divine Showdown the gameplay and core mechanics into more details

Most players have already guessed that 4 gods mean, 4 reel modifiers. So in that sense, Divine Showdown doesn’t deviate too much from the format we know. As for other Divine Showdown games, in this slot too the mighty ones will trigger random features in the base game for 1 spin. However, the base game as an enhanced functionality which is a random multiplier up to 10x.

The core of the divine battle is in the free spins feature. So after 3 Scatters appear on the grid, you’ll pick 1 god to represent you in a 3×3 side game where you’ll win by having the most powerful symbols. If you win the multiplier will increase. If you lose the other god will take over for a few round and until his lives expire.

Sure, Divine Showdown doesn’t innovate in terms of reel modifiers. But, what’s amazing is that most of our favourite features are in play, in one slot. What’s also great is the element of surprise each bonus brings. Indeed, picking a god does not guarantee that you’ll continue playing with it for the totality of the bonus. So it gives players the chance to experience new gameplay when a god is defeated instead of ending the game.

As you can see, Divine Showdown is a complete game. And to activate all its features, you’ll need to place your bets and have a proper bankroll at your disposal. Or you can also redeem a casino bonus if you’d like to give you more chances at fully exploring all it has to offer. And hopefully, collect big wins along the way too.