With a maximum potential win worth up to 6,000x stake, it’s no wonder East Sea Dragon King is attracting as many players as it does nowadays. In fact, it’s not just the game’s max win that is appealing. But the frequency at which the features are triggered is getting a lot of players curious about the game as well. East Sea Dragon landed in the lobby of most 100% legal Indian casinos in April 2020. So, it’s the latest Asian theme slot in NetEnt’s portfolio.

Look wise the game completely immerses players in an underwater adventure where the green East Sea Dragon King reigns supreme. But he also can help the lucky ones get their hands on significant payout as this symbol can expand and will award re-spins from time to time. So, let’s dive at the heart of the action and tell you more about East Sea Dragon King.

What’s so special about this video slot: without a doubt, the savviest readers of indiancasinos.org will already know that this year, one of NetEnt’s core missions was to enhance the appeal of its Asian theme game catalogue. And to reach their goal and diversify their asset library as quickly as possible. The game provider is, sometimes, just updating the theme of the game it releases. 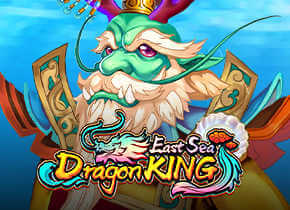 It was the case for a couple of the games in their Asian catalogue. And East Sea Dragon King video slot is no different as this game initially draws its inspiration from Berry Busts Max video slot. So players who’ve enjoyed Berry Burst before may appreciate its newest look which takes them in an underwater adventure.

It’ll only take you a few spins to figure out how East Sea Dragon King video slot works. But, you’ll certainly enjoy the game more by understanding what symbols trigger what.
First, let’s clarify one thing since cluster games all require a different number of symbols to award payouts. And so in this game, it’s 5 you’ll need to group to win.

Now, on your quest for big wins, the Dragon King will be your friend since he can appear anywhere on the grid and expand. And when the king shows up in all his glory, players will automatically get a re-spin. Plus, they could re-trigger up to 4, if more instances of his majesty appear on the play area. So, in other words, after the game awarded 4 re-spins. You could have a complete screen of wilds as the expanded symbols will always remain on the reels.

Now if you’re one of those players who enjoy knowing more about game statistics before taking a slot for a spin. You’ll love to know that NetEnt confirmed that, in the evaluation phase. This game theoretically awarded a payout 1.46 times every 10 game rounds. And on average it’ll take you 23 spins to activate the re-spin feature. The high activation frequency of the re-spins means that the East Sea Dragon King video slot is a great bet. This is because it won’t take you too long to see decent action on the reels.

For any more information on this game, we’ll invite you to visit any casinos mentioned on indiancasinos.org. But while you are here. Take a few seconds and visit our casino bonus section to see the latest offers you can claim.