The lost city of El Dorado has been captivating the imagination of explorers ever since the rumours of the city of gold surfaced. And so it’s no surprise that game developers frequently look at the ancient Maya legend when creating games. In fact, award-winning studios like NetEnt and Microgaming have all enhanced their game library with a slot that banks on the fable to entertain. And now it’s ReelPlay’s turn to add El Dorado Infinity Reels to the genre.

But thankfully, El Dorado Infinity Reels isn’t another makeover of the iconic slot Gonzo’s Quest. To start with the game grids is progressive and expands vertically. So it’s completely different than other El Dorado slots available on the market. And it doesn’t use a tumbling reel mechanics either. So it’s absolutely unique and adds to the genre while captivating crowds with superb visuals, colourful Mayan symbols and a calming jungle landscape in the background. 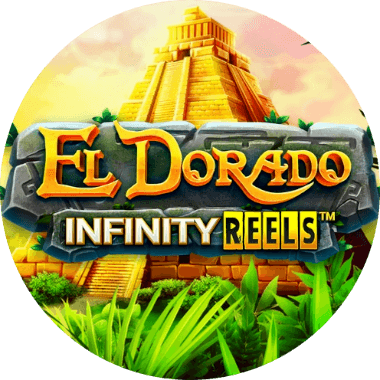 There’s a lot to cover when it comes to the gameplay of the video slot. And in such a short slot review it’s merely impossible. So let’s focus on El Dorado Infinity Reels key aspects. In essence, the free spins are triggerable with the help of temple symbols. And you can accumulate these symbols even when re-spinning. The counter at the bottom right of the grid keeps track of them. And also of the number of symbols per winning combo.

Now to win the non-progressive jackpot worth 888x your stake, you’ll need to win 12 times in a row. But don’t worry you won’t have to keep count of those since a meter will appear above the spin button after a win. And this meter will tell you the number of reels you need to unlock to win the jackpot. And also the multiplier index you’ve unlocked.

El Dorado Infinity Reels is for experienced players. But also for those who invest time in a game over multiple sessions. Evidently, you don’t have to use the complex game options available which give you the option to progressively better your odds of a win by delaying playing the free spins. If you want to, like any standard slots, you can play the free spins when prompted.

Now it’s clear that this slot is a colossal one, given its multiple options. And so from our experience, it’s best to play it on a good internet connection. Even if the game is available on mobile devices. It’s also worth knowing that because of the progression feature, some casino operators may prevent players from using casino bonuses to spin it. So, you’d be wise to contact the customer care to avoid disappointment if you play El Dorado Infinity Reels with bonus money.