As every football fan patiently awaits summer 2021 and the football world cup. We at indiancasinos.org thought we’d whet your appetite by reviewing Football: Champions Cup. A game that NetEnt released in 2016 to commemorate the event the world can’t seem to get enough of.

Indeed, Football: Champions Cup is first and foremost a game of chances which banks on a random number generator to deliver results. So everyone can win since there is no skill or team knowledge required to play. All you need to enjoy this game is right below. So, don’t miss it.

What’s so special about this video slot: In essence, Football: Champions Cup video slot is the only game where you get to pick a team before spinning. So when you open up the
game for the first time, you’ll have to pick a flag which will essentially represent your team. Now while everyone knows that Brazil, France or Germany are the teams to beat. Keep in mind that if you pick another team, it won’t change the overall winning odds of the game. So take your chance and pick the underdogs to win and re-write history. On a side note, there sadly is no India flag to pick in the loading screen. This is because India has not qualified for the event since 1950. 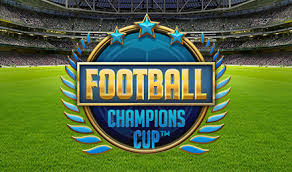 To sum up, as you spin this slot you’ll quickly realize that even the base game offers good winning opportunities. In fact, from time to time, you’ll see football rebound on the play area, and leave wilds behind them with every bounce of the ball. This game feature goes by the name of overlay wilds in the paytable. And it could add up to 5 extra wilds on any reels.

But if you’re looking to score big in this slot. Well, it’s 3+ Bonus symbols you’ll need. In essence, this symbol combination activates the shootout bonus game or in other words, the pick n’ win a game. In this bonus round, players are invited to shoot at a target displayed on a football net and guarded by a keeper. Your goal in this side game is to defeat the keeper and score a goal to collect extra cash prizes.

As you probably realize by now, Football: Champions Cup video slot is a unique game that caters for all audiences with easy to understand and well-themed features. And yet, we’ve not talked about how rewarding the free spins bonus is.

The bonus spins offer a battle element, a bit like in the invisible man video slot. But in this game, NetEnt has, of course, themed the bonus to the sport. And they’ve even ramped up the fun with 3 extra wilds symbols in play. The free spins feature is really where the football fans will have a blast as it is a multiple tier feature that allows players to qualify for the final and win more (up to 10,000 coins).

So, think you got what it takes to take home the gold? Well, if so you can try to score big on any casinos listed on indiancasinos.org.