According to the game provider NetEnt, there’s a tomb somewhere in Mesopotamia where a Pharaoh spirit guards riches. So the action of Gods of Gold INFINIREELS, transport players deep in this ancient Egyptian myth and in a dark cave where gold artifact surrounds the play area.

In essence, while the storyline of Gods of Gold INFINIREELS pays tribute to the past. This game boasts an entirely new game mechanic. So it’s very much of this century as you’ll see from your very first winning spin and when the game progressively adds extra reels to the 3×3 grid.

But now, don’t think for a second that because Gods of Gold INFINIREELS, banks on a new concept to entertain that it’s a slot exclusively for savvy players. While the slots variance may mostly appeal to experienced players. Casino newbies should have a blast playing this slot. And below you’ll find out why.

What’s so special about this video slot: The release of Gods of Gold INFINIREELS video slot, initially made a lot of people talking. Not only because this slot is fantastic, and as always NetEnt added lots of cool features which means the gameplay burst action and good payouts. But mostly because of the INFINIREELS the slot boasts. In fact, originally the trademarked infinite reels’ mechanics which means that the slot grid expands horizontally was used by another game studio. 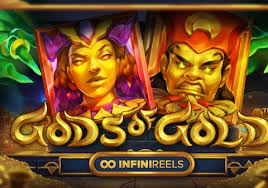 But NetEnt was quick to ink a deal with ReelPlay. And now they too can conceptualize slots that offer players an infinite number of winning combos and a progressively unlockable and yet unlimited play area.

The essential appeal to Gods of Gold INFINIREELS is that this game banks on consecutive wins to award significant payouts. But it’s worth knowing that by grouping 3+ identical symbols (or a combination of symbols and wilds) players will collect a minimum win worth 1x stake (low-value symbols). And every time a winning combo appears on the grid, it’ll automatically expand as players get a free re-spin.

Now if players can add more symbols to the existing combo, the game will continue expanding. And the meter located on the right-hand side of the reels will keep track of the achievements. This is valid for both the main game and the free spins feature.

Now, to activate the bonus spins with guaranteed wins 3+ Scatter symbols need to show up on the reels. And as the feature plays out, the same symbol combination will add an extra 5 free rounds.

By releasing Gods of Gold INFINIREELS, NetEnt is showing that it knows no boundaries. In fact, for us, it’s evident that NetEnt truly embraced the challenge to come up with its own “Megaways” mechanic as they do not at this point hold the distribution right for it. But in the end by pioneering INFINIREELS, they may well have come up with an even more solid feature than the Megaways.

With that said it’s worth keeping in mind that while the payouts of this game are exponential and could be worth up to 25,000x stake. The paytable of the slot mostly rewards for 10 symbols or less. But surely it’s something that NetEnt will improve with its next INFINIREELS slot.

After all, when it comes to online slots, they too evolve with the markets’ demand. This way, all players can find a game that meets their criteria in NetEnt’s collection.