For many Indian players, Guns n’ Roses by NetEnt is the best game ever created of all time. In fact, this game is truly epic and not just because it pays tribute to a legendary band. But also because it marked the beginning of a new game-style in online casinos.

Think about it for a second, after NetEnt released Guns n’ Roses, other game providers like Play’n Go per example have followed their footsteps. They have too created games of chances inspired by timeless bands and music pieces. But for the real fans of this slot, nothing currently available in online casinos matches the gameplay of the 80-90’s band inspired slot.

So it’s no surprise to hear that ever since this game went live, it’s rarely lost its premium spot in the lobby of online casinos. Players love to rock the reels on this game, and below you’ll know why.

The video slot is unlike other games in NetEnt’s Rock range. This one gives players the option to select the soundtrack they’ll spin too. And so this means that players can spin and switch the background music. But they can also choose their favourite song or a lucky track among the 5 hits produced by the band. And because of this Guns n’ Roses has voted the best game of the year in 2016. Now, of course, since releasing this slot the provider added more titles to its rock series. And yet, many agree that this slot is still the best game even if it’s the first to go live. 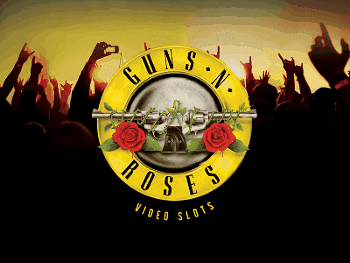 All and all, the gameplay of Guns n’ Roses video slot has a lot to offer. And in such a short game review it would be merely impossible to talk about all of them. So, for this reason, we’ll dissect our favourite ones. Plus, we’ll invite you to read the paytable to discover the other ones.

The Appetite for Destructions bonus feature

In our experience, the appetite for destruction is one of the most common base game mechanics. This random feature means that for a few seconds, the reels will fade away slightly. And this to make room for a huge cross which will essentially add an X of wilds onto the reels. Now the cross can appear partial and full when you’re lucky. So, brace yourself if you see the reels fade out. It could mean you’re on the verge of a big payday.

The Solo Multiplier worth up to 10x

The Solo Multiplier is also a random base-game feature in Guns n’ Roses. And you’ll know that you could win big when a symbol is selected at random. And when the reels keep on spinning as they’re slightly blurred and the multiplier increase after a few rounds. When this feature is active, you’ll win at least 4x more. But could win up to 10x the value of a winning combo.

The 3 tiers pick n’ click Crowd-pleaser bonus game is also one of the most commonly activated one. Generally speaking, this feature awards instant cash prizes after 3 bonus symbols landed on the reels. But if you’re so lucky to reveal free spins symbols instead of coin wins. Well, you could play 10 free spins that are electrifying. If not, well, know that if the total amount won exceeds 800 coins, a 2x multiplier will be applied to all wins.

So as you can see, Guns n’ Roses video slot is no small game. And yet, it’s not one of those slots where you’ll scratch your head as you spin the reels to understand the gameplay.

Indeed, most of the features are self-explanatory. But more importantly, it could deliver epic wins’ worth up to 225,000 coins.

So what do you think? Are you ready to give this game a try? If so, well head out to any casinos mentioned on indiancasinos.org and check out why so many people love Guns n’ Roses video slot. It is a gem of a game you’ll see.