Everyone knows that Jumanji 2 recently landed on the big screen. In fact, the iconic sequel already made over ₹3.6 Billion in the box office. And certainly, this makes it one of the most popular movies of December 2019. We know that many of you are big fans of the franchise. And what a better way to get into the mood for the occasion. Then to play a slot that brings the fantasy world to life on desktop or smartphone.

To sum up, Jumanji video slot isn’t the first branded game NetEnt created. But yet, it’s the first slot that takes its inspiration from a board game to entertain and where a special grid surrounds the reels. Sure other slots like red riding hood have a board game element. But nothing compares to Jumanji especially because it boasts with features that deliver lots of action like the blockbuster. 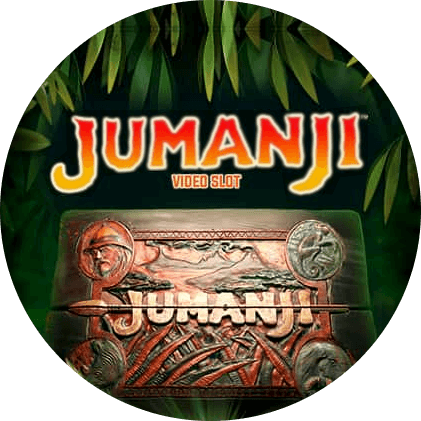 Jumanji the gameplay and core mechanics into more details

From our experience, the most frequently triggered random feature in the base game is the sticky win with re-spin. Indeed, from time to time, you’ll see a plant emerge from the right corner of the game. And vines will wrap symbols as the reels’ spin again. This feature is quite handy since It gives players the possibility to increase the value of a win. Another common and random mechanic is the stack crocodile which will add extra wilds to the game interface at random and may award big wins.

But if it’s big wins you’re after. Well, they’re more likely to come after 3 Jumanji symbols landed on the grid since this symbol combination activate the board feature. And so you’ll roll the dice by picking a totem. And you’ll make your way around the board to collect free spins, and all sorts of goodies too.

Sure, Jumanji video slot may take its inspiration from the first movie of the franchise. But since this game doesn’t use actor or footage imagery, it fits perfectly with the second movie too.

All and all, NetEnt did a fantastic job at blending timeless game elements and stunning graphics. And this enables players to feel the thrill of the game in every spin. So will you try your luck at rolling the dice, and head out to the jungle and leave your world behind? Why wait? Start your quest on any Indian casinos mentioned on indiancasinos.org if you dare to face the jungle.