Jungle Jim and The Lost Sphinx

In Jungle Jim and The Lost Sphinx, a hero travels to distant lands in search of riches. In fact, in this beautiful 3D slot, players are invited to head out in the Egyptian desert by night to find the gold sphinx tomb. Now, as you know, not all famous explorers find lost Egyptian wealth. But it’s not Jim’s first expedition. So teaming up with him could indeed be very rewarding.

In essence, this slot offers a good max win worth up to 6,250x a players stake per payline. The game also has a progressive grid. So, players will unlock more ways to win as the reels tumble and new symbols appear. But there’s more to this game as you’ll read below. Indeed, Jungle Jim and The Lost Sphinx is one of those slots that when you’re on a winning streak, the mechanics will ensure you keep it going. 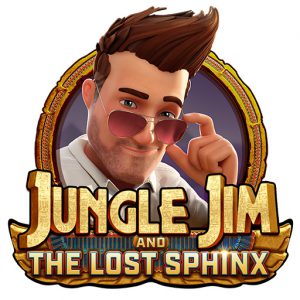 Jungle Jim and The Lost Sphinx is an avalanche style game. And so it’s similar to Gonzo’s Quest because the winning combinations you’ll create will always explode. And as the symbols cascade on the reels’ new ones will appear to fill the gaps. Which means that if you win once, the game will give you a second chance at winning again. But win more since the game grid will progressively unlock more possibilities. And also because the multiplier above the reels will increase as well.

In essence, the base game gives players the chance to multiply their win up to 10x. And in the free spins bonus, the maximum multiplier will see players winning up to 20x more in a lucky tumble.

Jungle Jim and The Lost Sphinx offers a super progression. Indeed, the base game ways to win will progressively offer more but starts at 35. And once the grid is fully unlocked, you’ll have access to 50.

Naturally, since all ways to win are available, the free spins feature has 50 paylines too. But it also has a unique Golden Sphinx collection feature. Which means that every gold Sphinx symbol you’ll unearth will appear on the multiplier trail to guarantee that the next time you win, you’ll get bigger multipliers. So, it’s easy to see how the 12 free round could indeed be advantageous.

So ready for a new adventure? Then visit any casinos mentioned on indiancasinos.org and find your casino bonus, find the one you like best. They all offer Jungle Jim and The Lost Sphinx on desktop and mobile. So you can’t go wrong.