Just a few years ago, the 80s made a real comeback in games of chances. In fact, the previous millennium and its neon, flashy hair due, and fast car chases were a real source of inspiration for game providers like Play’n GO, Quickspin, and Microgaming. But today, let’s focus on NetEnt’s take on the vibrant decade that has marked most slots enthusiasts among us. Because, when looking at 80’s inspired games, it really doesn’t get much better than Neon Staxx. Indeed, this slot boasts neon symbols. And it even has a synthesizer soundtrack which makes us travel back in time where fluorescent colors were hype. But besides the nostalgic take on the 80s Neon Staxx brings to the reels. It’s actually the gameplay that is memorable. And it’s also what keeps players coming back to it, even if this slot is a few years old.

What’s so special about this video slot: Did you know that Neon Staxx is part of a series of games? In fact, it was the first installment of NetEnt’s iconic Staxx series which include Butterfly Staxx (1 and 2) and Strolling Staxx video slot (the most volatile game of the series). So as you can see, the game we’re reviewing has pioneered an entirely new genre of slots. And one that is enjoyable even by novice casino players as most games of the range is quite low on the variance scale. So they deliver a steady flow of small wins which will keep players, even those with a small bankroll, entertained for a while. Well, providing they play responsibly, of course. 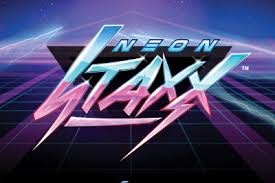 Neon Staxx the gameplay and core mechanics into more details

Neon Staxx is literally an electrifying game. And this is because every spin can cause good adrenaline rushes as the lightning effect that surrounds each reel shocks the grid. And this to display a stack of identical symbols selected at random.

Now in this game, all symbols, even the wild, (but not the Scatter) can appear stacked on the reels. And the gameplay mostly banks on the anticipation the stacks create.

Without a doubt, the biggest adrenaline rushes will come after 3+ Scatters show up on the reels. Indeed, this symbol combination could award up to 20 free spins depending on the number of pink scatter triangles you got. Now before the feature plays out the game will select a symbol, again at random that will always appear stacked when the bonus plays out. And once again the chosen symbol could be the Wild to deliver maximum fun and payouts.

With a maximum win worth up to 80,000 coins, what Neon Staxx lacks in the maximum potential win is more than made up but the anticipation that comes with each spin. Indeed, the gameplay of this slot is not predictable. And that’s even if, truthfully, there aren’t many features to trigger. Yet, in a funny way, this game keeps players on the edge of their seats.

NetEnt games are distributed by all operators mentioned on indiancasinos.org. And this slot is playable on desktop, mobile, and tablet. So if you’ve not tried this game yet, give it a spin. And to maximize the fun, remember you can redeem one of the offers mentioned on this page.