According to the game studio Yggdrasil, there’s apparently a cove in the nearby ocean where pirates have hidden loot. The secret bay is home to treasures worth as much as 4,400x stake. No one knows exactly where this secret bay is. But according to the legend, the biggest loot should stand proudly between 2 shipwrecks. And by a forsaken island where a mountain is shaped like a shark. At least that’s what the studio is leading us to believe in their April 2020 release Pirates 2: Mutiny video slot.

As you probably guessed, Pirates 2: Mutiny is a sequel game to the much loved Pirates Smugglers Paradise. So if you like the original cluster pays slot. And you’re looking for a way to take the thrill to the next level. Don’t miss the below review. It contains all the information you need to have a blast on your next adventure.

What’s so special about this video slot: Pirates 2: Mutiny is a game that was developed in collaboration with LeoVegas. So, for a limited time, it’s only available on this operators site. Now we’re not sure exactly how long LeoVegas has exclusivity for this slot. But you could expect to see it land in the lobby of other operators by the end of the year 2020. 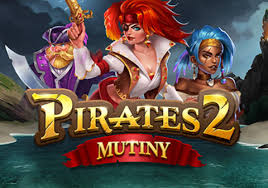 With that said, if you’ve not tried LeoVegas Casino yet and like what you’ve read about this game so far. Why not give this operator a shot? They won countless awards, and they’re dedicated to providing the best casino experience to players. And creating exclusive slots is only one of the many ways they show their appreciation.

To sum up, in Pirates 2: Mutiny, a little crab will guide you to the loot. In fact, the little creature is just below the reels. And almost right under the multiplier ladder which players will have the chance to climb by filling up rows on the main game interface. The multiplier could boost your winnings by up to 25x. If you feel 5 rows up, that is.

While not easy to achieve it is entirely possible given the combination of other mechanics the gameplay offers.

For example: from time to time, a giant wave can crash onto the reel after a non-winning spin. And with the tsunami non-winning symbols will leave the game grid to generate a win and a reel tumble too. Then, there’s also mystery colossal symbols which can cover up to 3×3 tiles. And a cannon blast which will remove all low-value symbols too.

Pirates 2: Mutiny does not disappoint. Admittedly the feature we’ve enjoyed the most was the free spins when testing it. It took us 124 rounds to activate them, which isn’t bad at all.

The ease in triggering the 7 free spins is attributable to the fact that the required 3 Scatters are collectable. So, in other words, the symbols don’t need to appear on the grid at the same time. In fact, Scatters part of a tumble are collected. During the bonus, they’re other features in play like a high-value symbol permutation and increasing multipliers which takes payouts to the next level.

Truly, Yggdrasil has done a fantastic job with Pirates 2: Mutiny. It’s no wonder LeoVegas wanted exclusivity for it. So check it out today and think about claiming a bonus to increase your spin time on this slot. It’s worth it to keep the fun lasting, you’ll see.