Planet of the Apes

When it comes to blockbuster themed games, it really doesn’t get much bigger than Planet of the Apes video slot by NetEnt. In fact, both the play area and the max win are colossal in this game. To start with, Planet of the Apes video slot is no traditional games, as it offers dual reels that spin side by side to illustrate the human and the Apes realms. Then, there’s of course, the max win worth 500,000 coins which is a lot superior to other hit games like Starburst or Gonzo’s Quest per example.

Now everyone agrees that when it comes to game features, NetEnt went all out when conceptualizing Planet of the Apes. The graphics theme also did a stellar job as this game boasts with 3D animation that transport players at the heart of the movie. Curious to know more about it? Then don’t miss the review below.

Frequently asked questions about Planet of the Apes video slot

What’s so special about this video slot: Planet of the Apes is a particular game because it uses 2 paytables. So this means that each reel set has its own paylines (Rise uses the betways 1 to 20 and Dawn uses the paylines 21 to 40). And, of course, each play area uses symbols that are bespoke to the Rise or Dawn grid. Now, just so you know, it’s just the symbol that changes, the paid value is equal. Sure, it might sound very confusing because it means that theoretically, there is 14 symbols payout value to remember. But actually, besides the scientists’ symbols (mid-value ones) both grids display the same character by symbol set. But in the Dawn, they’re just red and angry. 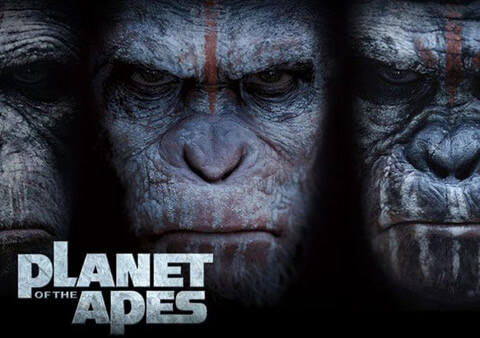 While the paytable of Planet of the Apes is descriptive. We at indiancasinos.org thought you’d like a bit more precision on the core mechanics. For anything else, the paytable has you covered. First, let’s clarify the Dual battle, which is a base game mechanic. In essence, before any spin, the Dual Feature can trigger at random. And you’ll know it’s active as one colossal symbol is selected per play area.

As the feature plays out, gamblers will have the chance to increase the value of payouts by collecting identical symbols. In this game, identical symbols can move from one play area to the other and will also stick to the reels. When it comes to the free spins each grid as it’s Scatter. And when 3 appears on the reel, the bespoke feature attached to the game mode will automatically activate itself. And will award 10 or 15 free spins.

Now let’s be frank, Planet of the Apes video slot can be a bit confusing to play if you’re new to online casinos. Hence we’d recommend you to read the paytable of the game before placing your first wager. Now if you opt to play this game, you’d also be wise to claim a casino bonus. Because as for all “complexed video slots“. In this slot, there’s a lot of side games and reel modifiers to see and play.

So to make the most of this game it’s recommended to place small wagers. But also to claim a casino bonus as it would be hard to see everything the slot has to offer with a small deposit. But, of course, since this video slot is no achievement builder game. You could also decide to have more than one session on this game to explore it fully.