Reel Rush 2 video slot is a sequel game inspired by a slot that NetEnt once said delivers “win anticipation that’s totally off the charts”. So when the studio announced a new instalment to the franchise, the expectations were high, as you can imagine.

And thankfully, Reel Rush 2 video slot didn’t disappoint because it has seen many improvements. Evidently, the biggest enhancement, besides the graphics, is the increase max win now at 25,000x a player’s stake. Plus, the new version is also a little bit more volatile. And so while the sequel kept many mechanics of the original game including the betways. It’s now more fun than ever thanks to the meter NetEnt added on either side of the reels.

Curious to know how these meters work before taking Reel Rush 2 video slot for a spin? If so, drop down below to know how this slot works. 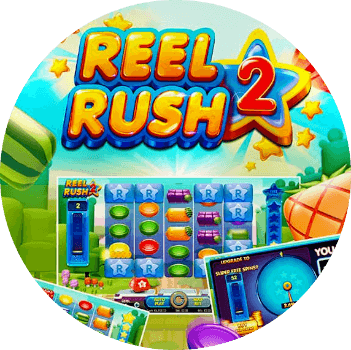 After loading Reel Rush 2, make sure to familiarise yourself with the play area. The first thing you’ll notice is the super token which you’ll fill by collecting gold coins marked with an R.

Now, there 2 ways to collect R coins. Indeed, from time to time, the train track will hand them to you. Or you’ll reveal them by winning and destroying blocks. The token will be handy once you’ve unlocked all play area as you’ll read in the paytable.

In essence, Reel Rush 2 video slot blends elements of social gaming and games of chances. This will be evident after only a few spins and after seeing the “wagon” add hearts, tanks, random wilds, win boosters and more goodies to the game grid. So as you can see, you never know what’s hiding in this game. And that’s one of the reasons why it’s so thrilling.

Reel Rush 2 video slot is playable with bonus money in most online casinos. There’s also a demo or fun mode where you can use “fake” money if you prefer to try the game before depositing. The choice is yours. Go ahead experience the rush of winning today. So many players have enjoyed this slot, and the chances are, you will too.