Christmas is a fantastic occasion for game developers to create new narratives for older games. Indeed, Santa vs Rudolf maybe a 2019 release but it’s worth knowing that the game’s mechanics were previously used in another game. And when you think about it, it all makes sense for NetEnt to reskin a slot instead of creating a new one. After all Christmas slots are mostly played in December.

To sum up, even if Santa vs Rudolf isn’t unique, the graphics are. So the game storyline leads us to believe that Rudolf stole Santa’s hat. And Rudolf appears to be going on strike since he sits beside the reel with his tongue out. And poor Santa is left on the other side of the grid scratching his head wondering what happened. So as you can see, there’s reel chaos in the north pole. And let’s see how this benefits players. 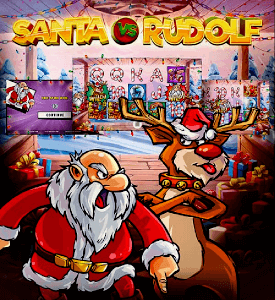 Santa vs Rudolf the gameplay and core mechanics into more details

In essence, even if Santa vs Rudolf features is 5 years old. The gameplay is still relevant today. In fact, both the main game and the free spins offer challenge and value. The slot uses a win both way pay structure. And so even if the game only has 20 paylines. It’ll feel like you’re playing on more because generally speaking, you’ll win frequently.

The game’s core mechanics is the 2 walking wild which always triggers a re-spin when Santa or Rudolf appear on the grid. And until the symbol(s) leave the interface. But if the 2 symbols collide as they move you’ll trigger the 10 free spins with a battle feature. The battle feature enables players to play side games like a pick n’ click multi-tier bonus with multipliers (if Santa wins) or Rudolf’s spins, when Rudolf’s meter is full (so when more Rudolf wilds appear during the bonus).

There 2 reasons why we think Santa vs Rudolf is fun. First, the progression feature during the free spins brings a lot of diversity to the gameplay. Which means that even if you trigger the feature multiple times, you’ll never know how it’ll end and which (if any) extra side game you’ll play.

The second reason why we think Santa vs Rudolf is so good is because of the substantial max win it offers. In fact, players could see their casino bankroll increase by as much as 200,000 coins in a lucky spin. And that’s enough to put smiles on faces during the festive season. So, don’t wait, give Santa a hand on any Indian casinos we mention.