Skulls UP video slot isn’t your traditional pirates’ theme game like Hooks Heroes by NetEnt per example. In fact, the slot’s grid is utterly unique. And you’ll progressively discover how different this slot is as you reveal new betways and skull symbols.

Look wise, Skulls UP video slot is superb and the reels’ boast with cartoony characters that set the tone well to the adventure. The game’s background, on the other hand, is a semi-realistic image of a beach. Besides the reel’s huge banana leaf move as the wind blows. The core feature of this game is naturally the progressive reels which by default give players 243 ways to win. But the slot also awards frequent re-spin. And they’re actually key to unlock the full play area. Yet, this game has a lot more feature that will keep you entertained. And below we’d like to invite you to discover them. 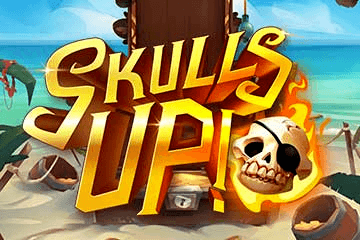 As you probably guessed it if you’ve read the review so far, your goal in Skulls UP video slot is to reveal the play area fully. Doing so means that you’ll have access to the full 1,944 ways to win. Now the first flaming skull that will appear on the reels will give you a re-spin and 324 ways to win. And if you’re so lucky to get a second, third, fourth, flaming skull, you’ll get even more re-spins and 432, 540, 648, betways etc. By default, the flaming skulls will remain on the second play area until they improve a winning combo.

The free spins are triggerable with the help of 3+ treasure chests. During the feature, it’s possible to win more rounds. In fact, you’ll get 2 extra rounds with every reel you fully unlock. But check the paytable if you wanted more information about this mechanic.

Did you know that at first, this video slot looked completely different? Indeed, this slot had a food theme where apparently flaming meatballs were in play. But after testing it, Quickspin realised that it needed a more engaging theme. So the team opted for a pirate approach which never fails to entertain.

All and all, this game is a great addition to the pirate genre, in our opinion. But, try it and see what you make of it. QuickSpin slots are widely available in online casinos in India. So, you won’t have any problems finding the game in the casinos mentioned above. And to keep the fun lasting remember to visit our casino bonus section. There’s a lot of bounties available there. So, don’t miss the chance to start your quest with more funds in your account. After all, more money means more playtime if you play responsibly.