Once upon a time, 3 fierce warriors’ kingdoms collided as their ruler craved power. And apparently, they took their appetite for control and their legions onto the great plains of Asia, NetEnt says. Sure, Warlords Crystals of Power video slot is inspired by fiction, or is it? In fact, the storyline of this game is so good that you’ll ask yourself that question.

But now, if you’re one of those who are more captivated by game features as opposed to backstories. Don’t worry. This slot does not disappoint. In fact, we could write up a whole chapter about all the mechanic’s Warlords Crystals of Power video slot boasts. But instead, we’ll give you a good recap of the gameplay and let you pick aside as the battle unfolds onto the 5 reels and 3 rows of what could only be classified as one of the best releases by NetEnt.

What’s so special about this video slot: without a doubt the battle feature of Warlords Crystals of Power is unique. And this feature is activated when 2 Scatter symbols land on the reels at the same time. Initially, when the battle starts, players will receive 1 re-spin with sticky Scatters as the reels ignite to potentially award a 3rd scatter and trigger the free spins feature. 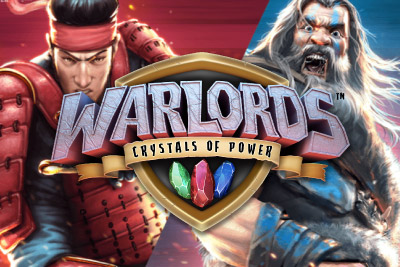 Now there 3 bonuses to play, 1 for each warrior. The colour of the last Scatter determines which bonus you’ll activate. Now from our experience, and after playing thousands of rounds on this slot. It feels that the blue scatter or the barbarian spin are the most rewarding ones. And in the below section you’ll know why.

To sum up, Warlords Crystals of Power boast random features in the main game that’ll see wilds overlay (colossal 2×2, diagonal, or sporadically added onto the grid) enhance players’ chances at collecting a win.

But the real magic of this game truly is in the free spins feature and after 1 side won the battles. In essence, if it’s the Barbarian that wins, you’ll play a minimum of 9 rounds where the reels are filled with scatters that award 3 extra rounds and animal symbols. If the Samurai wins, it’s 5 free spins with sticky wilds you’ll get. The priestess, on the other hand, awards 7 free game rounds with increasing multipliers.

For more information about any of the features, don’t hesitate to contact the support department of your favourite casino or read the additional information available in the paytable.

On Indiancasinos.org, we always aim to be objective in our game review. But when a slot is as good as Warlords Crystals of Power, it’s hard to find flaws. Sure, the savviest players could say that the paytable isn’t that high. Indeed, the 3 stacked warriors award 300 coins for a 5-of-a-kind. But these symbols can get a boost as wild multipliers are in play in this game. But still, the max win worth 1,000,000 coins means that this game could surprise you.

Warlords Crystals of Power is ultra-engaging, and it’s one of those games that players keep on going back to. It’s also playable with a casino bonus.

So, if you’re lucky you could pocket up to 1 Million coins with the premium you’ll get from the house. And since it’s a NetEnt slot, most casinos distribute it. So pick your favourite and let the battle begin.