Back in the days, it’s believed that one of the most dangerous professions a man could do was train controller or banker. And when you think about it for a second, it completely makes sense. In the 17th century, where the action of Wild Wild West: The Great Train Heist takes place, trains and banks were often the targets of bandits who were looking to risk it all. And this in the hope of getting rich quickly.

But thankfully today players can get a share of the action. And hopefully, the loot too without risking more than ₹10 if they want to. Indeed, Wild Wild West: The Great Train Heist invites players to saddle up and team up with 4 outlaws who are getting ready to jump a train in the middle of the desert. It’s the ultimate cowboy story. And today you’ve got a chance to star in it.

What’s so special about this video slot: Without a doubt, one of NetEnt’s most iconic western-themed slot of all time is Dead or Alive. But it’s worth knowing that while Wild Wild West: The Great Train Heist is a western-inspired game too. The gameplay is very different. In fact, if we had to pick a game that is somewhat similar to Wild Wild West: The Great Train Heist it would have to be Jack Hammer as it too uses a vintage graphic style that somewhat mimics those old comic books that people love. But when it comes to the features, this game sits in a category of its own as few slots can award up to 30 free spins with 5 Scatter symbols. 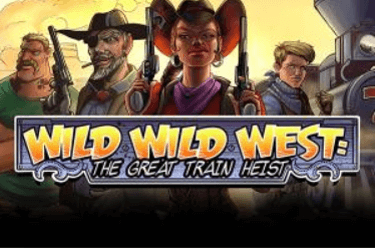 To sum up, in Wild Wild West: The Great Train Heist there are a couple of features you’ll have the chance to activate as you set the reels in motion.

For instance, you can collect an instant cash prize when 3 golden safes appear on the reels in the base game. This symbol combination will automatically activate a mini pick n’ win feature where players are invited to select a symbol to unlock its content which could be worth up to 50x stake.

And so to trigger the bonus and the wheel that comes with it its 3+ 7 symbols you’ll need.
In essence, this symbol combination will automatically activate the 4-part bonus wheel. The wheel determines which of the 4 modifiers you’ll play with for the next 10 or more rounds.

Wild Wild West: The Great Train Heist is a really good game and there are a few reasons for that. First, this slot awards more free spins depending on the number of scatters that landed in view. And the good news is that during the feature you can reactivate the same number of rounds as in the base game with the help of more Scatter symbols. Now as you probably guessed it, retriggering the feature means that once again you’ll get another reel modifier in play.

And because theoretically nothing could stop a player from activating all 4 types of wilds, the game offers at once. It means the bonus spins could indeed be very rewarding. Why wait, the heist is about to start, so saddle up and join the action on any online casinos mentioned on indiancasinos.org today.