According to NetEnt, there is a land deep in a magical forest where Elves live. And so to pay tribute to their realm, the game provider created Wilderland video slot in March 2020.
Without a doubt, Wilderland video slot is one of the prettiest games released by the award-winning aggregator this year. In fact, it’s not just the dark game background with its light firefly animation that sets the tone well for a mythical adventure. But the graphics on either side of the reels immediately plunges players in an enchanted forest. And where the trees are buzzing with all sorts of lives.

Truly, Wilderland video slot is one of those games that’ll just blow you away graphically speaking. But for a slot to be magical, it takes more than a solid storyline and concept. And thankfully, this slot also burst with wild features as you’ll discover below.

What’s so special about this video slot: Wilderland video slot is one of those games that offer a hot zone, or an activation zone if you prefer. And this mechanic is not often used in online games of chances. In fact, to our knowledge, the activation zone feature is only present in a few of NetEnt’s slots like Hotline video slots per example. And in the latter game players can enable and disable the feature by changing their wager sizes. But in Wilderland video slot, the activation zone is present on the game grid by default. So, no need to pay extra. And that’s a great thing as it plays a vital role in the gameplay as you’ll find out in the below section. 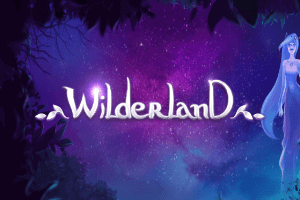 In Wilderland, NetEnt has clearly demonstrated that its team’s imagination knows no boundaries. In fact, in this game, they’ve taken the popular walking wild feature from Jack and the Beanstalk, per example. And they’ve taken it to a new level by enhancing its capabilities. And so in the gameplay, this translates into frequent wins every time a wild symbol appears in the activation zone. In case you wondered, the activation zone is the central row of the grid. It’s easy to spot since it shines as the reels are set in motion and modifiers appears on this special zone.

Now, even if the hot zone activates most features. It’s worth knowing that the Scatter or walking wilds scatter symbol can appear anywhere to trigger the free spins bonus. And during the side game, the activation zone covers the entire grid. So players have a greater chance of collecting wild wins.

Now given everything this slot offers you may wonder what else there is to know. Well, besides the several walking wilds that you can trigger through the gameplay. It’s worth remembering that the base game has a magic wand feature. The magic wand feature is totally random but completely handy as it can make stacks of walking wilds reappear on the game grid. And this will naturally start the winning sequence all over again.

As you can see, this slot is a very enjoyable game to play as it offers good value with the 4 different types of walking wilds that can transform a simple spin into an epic one. Try it today and see what you make of this game. We think it’s a magical slot and maybe you will too. So waste no time and visit any casinos mentioned on indiancasinos.org to try it.