Sure, Wonky Wabbits video slot maybe a 2014 game released by NetEnt. But actually, given the current climate, we thought it was the best time to review it. After all, Easter celebrations are somewhat in jeopardy this year. So, we thought it would be a good idea to look back at an older and yet wonkier Easter-themed game. Because nowadays, all signs point towards a unique Easter indeed. Plus, we can all remind ourselves why many players played Wonky Wabbits at one point. In fact, even if Wonky Wabbits is a few years old, it too aged gracefully.

To sum up, the core feature, the win both ways mechanic, is still very much used in hot games today. Then there’s the wild duplication which makes the base game extra appealing since this feature can turn a losing spin into a winning one. But let’s tell you more about this below.

What’s so special about this video slot: Now if you’re a hardcore NetEnt fan, there’s a good chance you’ll know that before 2019, the game studio mostly advertised the max win amount in coin value. So not in x time stake. In fact, back in the days, it was not just NetEnt that used this format to reveal the game’s exposure. But Play’n Go and Microgaming also follows this same max win amount writing convention. But, nowadays everyone agrees it’s confusing. So after 2020, NetEnt just like its rival opted to display the maximum potential win in x-time stake to make the paytable more user-friendly. So this means that Wonky Wabbits’ max win, 390,000 coins is worth close to 4,000x stake. 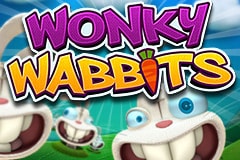 In Wonky Wabbits, everything happens on 1 play area, the one you’ll see right after loading the game. But still, take a few seconds to familiarise yourself with the paylines as there are few games in online casinos that offer a 15 win both ways pay structure. To sum up, in this game every time you make a winning combo with a wild symbol you’re almost guaranteed to win again. And this is because the cute rabbit will emerge from the garden like interface to eat up vegetables and replace them with wilds. It’s also worth knowing that from time to time stacked wilds can appear on the second and fourth reel. That’s pretty much it, but for more information about the feature, don’t hesitate to look at the paytable. And at the same time have a look at the best-paid symbols to know what to watch out for.

Given the win both ways pay structure, Wonky Wabbits is a great game to play if you’re a Starburst fan. In fact, this slot may help the hardcore Starburst enthusiasts to vary their gameplay, but without learning many new features.

To start with, playing this slot instead of Starburst means having access to a larger max win. Plus, you’ll have the opportunity to make winning combos on more paylines too. Then there’s the wild duplication mechanic who just like in Starburst can help to create winning combos. But since the wild can duplicate anywhere in the play area. It ramps up the excitement of the gameplay. Because admittedly the extra wilds are very predictable in Starburst, as we can all agree.

So if you’re looking for a good Starburst alternative, why not give this slot a spin, who knows what kind of sweet treat you’ll get out of it.